Artist: Juan Pablo Navarro
Length: 45:21
Subtitles: English
Description: In this bass masterclass, acclaimed Argentinian bassist Juan Pablo Navarro shows you the fundamentals of Tango. Juan Pablo brings you through a series of exercises and techniques illustrating the nuances of this beautiful musical style. If you want to learn Tango from a true master, this bass lesson is for you. NOTE: There is a PDF bundled with the download version of this video (not the $8.99 streaming version) which includes the onscreen notation. Also, this video is in Spanish, but there are English subtitles available. 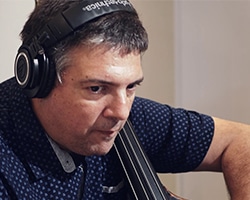 J.P.N. is considered by peers and by critics as one of the most important artists playing double bass in argentinian popular music . He was born in Avellaneda, Buenos Aires, in 1971. He got the Double-bass and Music Education Teacher degree at the “Conservatorio Provincial de Música Luis Gianneo”. Later he studied double bass with Sergio Gugliota, Ricardo Planas, Oscar Carnero and Anthony Bianco; music structure with Fermina Casanova and Marcelo Perticone; and music composition with Diego Schissi. In the year 2000, he got the scholarship of the Antorchas Fundation, which allowed him to study at the Carnegie Mellon University in Pittsburg, USA. There, he performed as a principal bass at the Carnegie Mellon Philharmonic Orchestra, until april 2001. With this orchestra he performed at the Carnegie Hall. He also founded Tangocontempo (asociation to promote new Tango Music)

He toured in China with Richard Galliano quintet on November 2017.JPN did Tangos de la Posverdad Tour with his Sextet, on the last may 2019 in Europe.They played at Bozar, Bruxelles, De Doelen Theatre, Rotterdam, Le Triton, Paris, Festival Tango Fatal in Holland .Also He taught Masterclass at Conservatoire de Gennevilliers, Paris , University of Arts Zurich , ISB convention at San Francisco University ,CODARTS ,Holland and many others.
His last work Los Dopados-La Música de Juan Carlos Cobian it has nominated as a best live album of the year by the Carlos Gardel awards.