Video 1: In this non-grip drum technique lesson, acclaimed drummer Marko Djordjevic shows you his effective and uncommon approach to playing the drums. Marko breaks down the elements of his exciting technique with the sticks, kick and hi-hat pedal so that you can achieve effortless drumming and a superb sound. If you want to get more out of your playing, this drum technique masterclass is for you!
Topics Covered: Drum Technique, Non-Grip Method, Warmups Using 4 Limbs, 4-Way Coordination Flow, Sequences, Getting an Open Drum Sound, Moeller Whip, Single Stroke Rolls, Double Stroke Rolls, Dynamics, Ghost Notes, Accents, Posture, Kick Drum Technique, Heel/Toe, Hi-Hat Technique, Etc.

Video 2: In this limb independence drum lesson, acclaimed drummer Marko Djordjevic shows you his effective and uncommon approach to playing the drums. Marko breaks down his left foot concept and shows you how to make the hi-hat a prominent voice in your drumming. He also addresses form, musicality, playing over the bar line and more. If you want to add some new ideas and skills to your arsenal, this drum masterclass is for you!
Topics Covered: Drum Independence, The Hi-Hat, Coordination Exercises, Sequences, Rudiments, Playing Musically, Playing Over the Bar Line, Singing the Bass Line, Limb Interplay, Odd Meters, Polyrhythms, Etc.

Video 3: In this drum masterclass, acclaimed drummer Marko Djordjevic shows you his approach to improvisation, thematic development, playing jazz and more. Marko breaks down exercises and concepts that will help free you from preconceived fills and worked out patterns so that you can truly create music in the moment. If you want to add some new ideas and skills to your arsenal, this drum masterclass is for you!
Topics Covered: Drums, Improvisation, Motivic Development, Soloing, Tied Hands Approach, Using Restrictions, Listening, Rhythmic Constructs, Platforms, Figures, Subdivisions, Syncopation, Press Roll, Moeller, 3-Point Symphonic Grip, Ride Control, Playing Jazz, Dynamics, Etc.

Video 4: In this drum masterclass, acclaimed drummer Marko Djordjevic breaks down his approach to using the brushes, making beats and more. Marko shows you various brush techniques, some odd time signature grooves, his signature beats and more. If you want to add some new ideas and skills to your arsenal, this drum masterclass is for you!
Topics Covered: Drums, Playing the Brushes, Patterns, Groove, Ballads, Swing, Motions, Sweeping, Odd Time Signatures, Beats, Subdivisions, Breaking Up Patterns On The Kit, Following the Bassline, Variation, Etc. 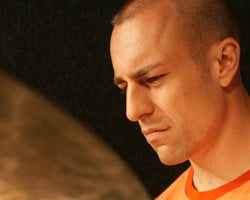