Michael Weiss (Get More Out Of Your Tunes & Arrangements)

Michael Weiss (Get More Out Of Your Tunes & Arrangements)

Artist: Michael Weiss
Length: 20:05
Description: In this jazz masterclass, acclaimed jazz pianist Michael Weiss introduces various concepts and devices to help you get more out of your tunes and arrangements. Michael discusses how to stitch harmony, melody and rhythm together to create an engaging piece of music and not just a "head" to "blow on". If you want to write more meaningful and robust compositions, this jazz lesson is for you. NOTE: There is a PDF bundled with the "purchase" version of this video (not the $7.99 "rental" version), which contains the embedded notation seen in the masterclass. 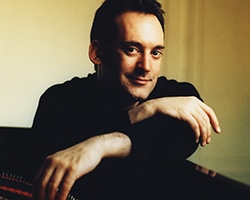 “he can focus the intensity in a tune as well as any pianist in mainstream jazz.”
– New York Times
“Weiss’ shrewd writing and arranging skills are as clearly in view as his sleek piano work”
– The New Yorker
“An energy and irrepressible inventiveness… The nimbleness of Weiss’ technique was
matched by the intellectual heft of his ideas.” – Chicago Tribune
“Weiss’ compositions take on different shapes, great complexity and fresh perspectives”
– Washington Post
“One of the most fluent and flexible pianists of his generation.” – BMI Music World

As a composer Weiss is a two-time Chamber Music America New Works grant recipient
and was the grand prize winner of the 2000 BMI/Thelonious Monk Institute’s
Composition Competition presented to him by Wayne Shorter. Weiss’ compositions
reveal eclectic influences from the worlds of jazz, 20th Century classical and even rock.
Weiss focuses on extended forms, thematic development and attention to detail. “A
greater percentage of composition in the mix is crucial to keeping Jazz moving forward,”
explains Weiss. “The solo after solo bit on the same chord changes is becoming a worn
out model. This doesn’t mean giving up on jazz’s foundations. I’m interested
in incorporating improvised solos within a piece like characters in a play or perhaps as
the narrator between scenes. I’m always looking for fresh ways to expand my material.”
Weiss’ five recordings as a leader on the CrissCross, SteepleChase, DIW, and Sintra
labels have been hailed by the critics. His 1987 debut, Presenting Michael Weiss was
Stereo Review’s “Best of the Month.” His recording, “Soul Journey” features a collection
of nine original compositions for septet:

“Weiss has a rich palette of composing devices at his command” – Downbeat
“Weiss’ original compositions conjured a distinct world of sound, a testament to the
nature of Weiss’ imagination.” – Chicago Tribune
“Warmth, integrity and above all, originality. Weiss’ originals are formful and dynamic
enough to sound as if they were standards of the genre.” – JazzTimes
“the songs simply smoke” – Detroit Free Press
“Weiss is a vital talent with something important to say” – All About Jazz
“About as close to perfection as a recording can get….If there is truly justice in our
world, this should be a Grammy nominee.” – Jazz Improv
“A prodigious bop-and-beyond pianist and composer…. consummate musicianship and
alluring improvisations” – The Star Ledger
“This music lives and breathes freshness and exhilarating originality. The individual
selections are strong and attractive enough, to still be played as jazz vehicles in 10, 20,
or even 50 year’s time.” – Jazz Journal
As a sideman Weiss appears on recordings of Johnny Griffin, Frank Wess, Charles
McPherson, Steve Grossman, Vanguard Jazz Orchestra, Ronnie Cuber, Louis Smith,
Dick Oatts, the Smithsonian Jazz Masterworks Orchestra and others.

Weiss is deeply committed to jazz education. He has held faculty positions at Indiana
University, Hartt College of Music, Queens College. In master classes and residencies
throughout the world Weiss aims to relay his bandstand experience through a host of
topics that directly address the standards and performance practices required of a
professional jazz musician.