Artist: Mordy Ferber
Length: 55:55
Subtitles: English, Spanish
Description: In part one (1 of 2) of this "Creative Jazz Guitar" masterclass, acclaimed guitarist and educator Mordy Ferber shows you a variety of his modern jazz guitar concepts. Mordy discusses and demonstrates techniques focused on exploring new sounds in your comping and linear improvisation. If you want to get a fresh perspective on guitar improvisation, this masterclass series is for you. NOTE: There is a PDF bundled with the "purchase" version of this video (not the $8.99 "rental" version) which includes the onscreen notation. You can purchase both videos and the PDF in this series at a discount here! 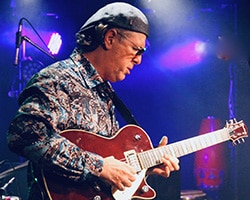