Artist: Ruby BC
Length: 40:19
Description: In this music industry and keyboard masterclass, Roland artist Ruby BC tells you how to be successful in the music industry using her experiences as a guide. Ruby discusses her move from music school (Boston) to LA and the mistakes musicians often make in the process. She discusses getting gigs, auditions, networking, touring, writing sessions, making a name for yourself in the industry and much more. Note: Although Ruby is an accomplished keyboardist, there isn't a ton of keyboard specific information or playing in this video. This video is really more of a guide for musicians moving to a big city and striving to get to the next level! 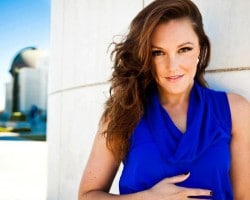 Noted for her versatility and musicality, pianist/keyboardist Ruby Biloskirka-Conley is an up-and-coming artist from Boston, Massachusetts. Ruby is a promising young artist who has already proven herself as an in-demand sideman and accompanist with the experience of a seasoned musician. “It is very clear that she is immensely talented and will definitely do well in the industry…a remarkable degree of preparation, sensitivity, communication, musical insight, proficiency, and leadership”(George Monseur, Berklee College of Music Professor and conductor of the Merrimack Valley Philharmonic Orchestra.)

As a trained pianist and performer, Ruby has engaging stage presence and personality that make her a sought after band member. Her versatility and experience in styles ranging from pop to jazz, gospel to rock, make her a favored accompanist to vocalists, instrumentalists, session and touring musicians. As a bandleader she has headed ensembles in jazz, “RubyBC and the Music Factor”, classical trios, and her most recent funk fusion project “RubyBC and the Next Step”. “Every so often I meet an individual who is truly extraordinary as both a musician and a person. Ruby is an esteemed bandleader and an incredibly proficient pianist, versatile to any style or situation. Her natural leadership style warrants a respectful and productive atmosphere and makes her a pleasure to work with”(Ben Whiting, baritone saxophonist, Boulder CO.)

Ruby has worked as a studio musician recording in Sanctum Sound, Q Division Studios, Mix One, Berklee Studios, and other independent recording studios. She is as comfortable playing a Hammond B-3 organ, acoustic piano or Rhodes, as she is programming multiple keyboards. “Ruby has already performed with and is being sought out by many students and teachers to accompany their performances. Surely we will be seeing more of her in the future!”(Casey Scheuerell, Berklee College of Music Professor and professional drummer.)