Artist: Asaf Rodeh
Length: 28:38
Subtitles: English, Spanish
Description: In this networking in the music industry masterclass, professional musician Asaf Rodeh gives you pointers on breaking into the music scene in a new city. This masterclass video is a must-see for any musician who is considering moving to a big city to pursue a career in music.

Topics Covered: Networking with musicians and music industry professionals, managing your time when you first arrive, avoiding "ego pitfalls", moving to a new country, dealing with visa and immigration issues, breaking into the music scene, choosing the right demo to showcase your talents, getting the right gear for the gig, developing your image and brand, the audition process, playing to your strengths and more. 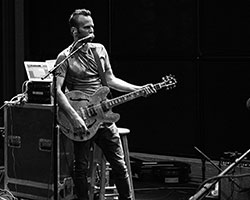 Asaf Rodeh is a Los Angeles  based session guitar player and producer.

Born and raised in Israel, Asaf moved to Los Angeles in 2007 to pursue a music career and quickly found his way into the local scene.  His musical diversity brought him to work with a wide range of artists such as David Archuleta, Stephanie Quayle, Mika Ben- Yami and many others.