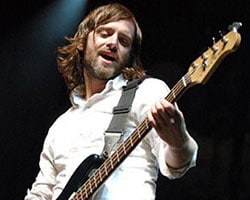 Pete Griffin is a true musician, able to adapt to any style of playing with complete authenticity, while still maintaining a sound and style all his own. Pete has shared the stage with some of the biggest names in rock, jazz, pop, and metal, and he’s toured the world several times over. As a bassist, Pete has the ability to play exactly what’s needed to make the song sound better, rather than just showing off his own skills (although he can show off when needed.)

Growing up a few miles from New York City, Pete got his first bass at 13, and quickly realized his deep love of the instrument. When Pete’s early bass mentor/idol, Dan Binggelli, passed away at the age of 19, Pete decided to dedicate his life to pursuing a career in music.

Pete obtained a Bachelor of Arts in Music from the prestigious Northwestern University, studying jazz and classical in school while playing rock and pop gigs around Chicago. The day after graduation, he packed all his belongings in his car and moved to Los Angeles. Within a few years, Pete found himself touring the world with Grammy nominated pop-rock band Hanson, as well as playing gigs with classic rock icon Edgar Winter.

in 2006 Pete joined Zappa Plays Zappa, a tribute band dedicated to playing the music of Frank Zappa, and led by his son Dweezil. Having grown up listening to Zappa music, Pete enthusiastically dove into playing this nearly impossible material with complete accuracy and authenticity. Zappa Plays Zappa toured the world several times over, won a Grammy Award in 2008, and was joined onstage by such legendary musicians as Steve Vai, Terry Bozzio, George Duke, Chick Corea, Eric Johnson, Stanley Clarke, Mike Portnoy, and many others.

Having re-created some of his favorite music for nearly 6 years, Pete left the Zappa band in late 2011 to focus on creating new music, both with his own band Gryphon Labs (featuring other members of Zappa Plays Zappa) as well as other LA based bands in all genres, from technical metal to intelligent pop. In late 2012, Pete toured with the cartoon death metal band Dethklok, from the Adult Swim TV show Metalocalypse, featuring guitarist/creator Brendon Small, drummer extraordinaire Gene Hoglan, and guitarist Mike Keneally.

Pete continues to live in Los Angeles where he performs, records, and teaches on a regular basis. Known for his smiling yet soulful stage presence, Pete is one of the rare musicians that is as much fun to watch as he is to listen to.