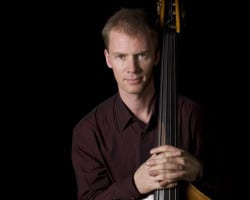 “One of the most interesting and explosive bass players to come along in a long time” reads a quote from a review in the French newspaper Le Monde, referring to bassist Johannes Weidenmueller.

His warm full sound, his mastery of time and his flexibility and openness have made him one of most sought after bassist in a wide variety of musical settings. He has collaborated with the National Orchestra of Spain, the Balthasar Neumann Orchestra and choir, flamenco musician Chano Dominguez, the Indian music ensemble of Gaurav Madzumdar, tabla virtouso Ty Burhoe, New Orleans keyboard legend Dr.John, and singer Madeleine Peyroux.

Born in Heidelberg, Germany Johannes was introduced to music early on. He started playing cello at the age of 6 and kept a busy performance schedule throughout his high school years, participating in many local and regional chamber music and orchestral events. After switching to the double bass at age 16, he went on to study jazz bass at the Conservatory in Cologne and soon after made the move to study at the prestigious Jazz and Contemporary Music program of the New School University in New York. Here he was able to study with jazz greats such as Ron Carter, Dave Holland and Buster Williams. In 1991 he joined the trio of legendary pianist Hank Jones and performed with him throughout North America. Playing with Hank Jones paved the way to becoming a full time professional bass player and countless performances with many other jazz greats have since followed.

While being busy performing over 200 concerts a year around the world, Johannes is also a committed educator. He has been on the faculty of the New School’s jazz and contemporary music program since 1997 where he teaches bass and ensemble and ear-training. He also is in demand as a clinician, teaching workshops and clinics at the Banff Center for the Arts, NYU, New England Conservatory, U of Green Bay, the Amsterdam Conservatory, U of West Virginia, U of N.C Chapel Hill and many others. In addition he is also the author of two bestselling books on metric modulation published by Mel Bay.

He has been the recipient of numerous awards and grants including the young European jazz artist of the year award in 1993 and 1996, the Hennessey jazz prize 1996, grants from Arts international and the New School faculty development grant.