Artist: Gorden Campbell
Length: 32:52
Description: In part two (2 of 2) of this R&amp;B, Hip Hop, Pop and Gospel drums lesson, acclaimed drummer Gorden Campbell shows you some tips and tricks that have kept him on top for over 20 years. Gorden discusses and demonstrates important concepts that have made him a first call drummer including groove, feel, the gospel style, musical interpretation, playing with tracks, professionalism and more. If you want to know the secrets of an a-list drummer who's worked with artists like George Duke, Jessica Simpson, Beyonce, 50 Cent, Mary J. Blige and Earth, Wind &amp; Fire, this video is for you! NOTE: You can purchase both videos in this series at a discount here! 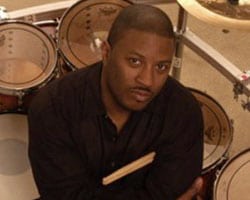 He is one of the founding members of The Rhythm Alliance.

As a producer Gorden has worked with Brent Jones and the TP Mobb, II D Extreme, Gerald Albright, The Lilly Mack singers and Dylan Allen (www.dylan-allen.com). His music can also be heard on various MTV shows, The Jamie Foxx Show, Kimora Lee “Life In the Fab Lane” and Love Chronicles (the movie). The track on the homepage was produced by Gorden.

Born in New Haven, Conn., Gorden was raised in Newburgh, N.Y. where he began playing drums at his grandfather’s church at the age of 5 yrs old. By age 14 he was also playing keys and organ. From 4th grade thru college he took formal lessons with some great teachers including Jazz great, Grady Tate. Performing in marching bands, jazz bands, orchestras, gospel groups and even singing in chorus, Gorden was able to hone his skills in a variety of musical styles.

In 1993 Gorden went on his first world tour with MCA recording artist SHAI. In 1994, Gorden received his B.A. in Music with a focus in Jazz studies from Howard University. 2 days after graduation, Gorden moved to Los Angeles and has been an “in demand” drummer and producer ever since.