Artist: Dory Lobel
Length: 40:53
Subtitles: English, Spanish
Description: In part one (1 of 3) of this pop and rock guitar masterclass, Dory Lobel shows you why he's an in demand guitarist in a variety of settings. Dory demonstrates and discusses warm ups, picking techniques, neck knowledge, chord function exercises and more. NOTE: You can purchase all three videos in this series at a discount here! 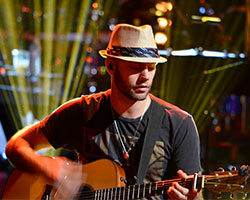