Artist: Miles Okazaki
Length: 50:43
Subtitles: English, French, Italian, Spanish
Description: In this rhythmic improvisation for guitar lesson, jazz guitarist Miles Okazaki shows you how to add rhythmic interest to your guitar playing. Miles discusses and demonstrates using motifs, building phrases, incorporating subdivisions, improving your time and more. If you want to take your rhythmic concept to the next level, this guitar masterclass is for you! 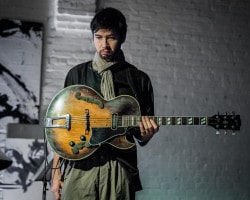 Miles Okazaki is an American musician based in New York City. He is known for his technical command of the guitar, his rhythmic approach to improvisation and composition, and his work in contemporary music theory.

Okazaki grew up in Port Townsend, Washington, a small town near the Olympic Mountains in the Pacific Northwest. As the child of visual artists, his first expressions were with drawing, painting, and building. He became interested in music and learning guitar at age 6. When he was 12 years old, he first heard recordings of Charlie Christian, which opened the door to the study of improvisation, and music replaced visual arts as his main interest. His teacher on guitar at this time was Michael Townsend, and his studies in improvisation took place over five years at the Centrum Jazz Workshop, only a few blocks from his house. He began playing regular gigs at age 14, received many awards as a guitarist throughout his early years, and eventually placed 2nd in the Thelonious Monk International Guitar Competition.

Okazaki moved to New York City in 1997 to pursue a career in music and begin writing his own material. His teacher on guitar at this time was Rodney Jones, who recommended him for his first gig, with Stanley Turrentine. Okazaki spent four years on the road with vocalist Jane Monheit, while also writing and rehearsing the music for his first album, Mirror, which was released independently. The album received a “Critics Pick” in the New York Times, calling it “a work of sustained collectivity as well as deep intricacy.” This idea was taken to a higher level on his second album, Generations, described by pianist Vijay Iyer “the sonic equivalent of Escher or Borges, but with real emotional heft,” and his third album, Figurations, was selected as one of the New York Times top ten albums of 2012, described by Ben Ratliff as “slowly evolving puzzles of brilliant jazz logic.” Besides writing the material for these albums, Okazaki also acted as producer and illustrator.

As a sideman, Okazaki works in many areas, ranging from Standard repertoire to experimental music. His most recent recordings and tours include Steve Coleman and Five Elements, Kenny Barron, Jonathan Finlayson, and Dan Weiss. He has been touring internationally for 15 years with various groups, and is also a dedicated educator, having taught at the Banff Institute, The New School, Queens College, The Juilliard School, Amsterdam Conservatory, and many other institutions. Outside of guitar, his past teachers include Anthony Davis (composition), Ganesh Kumar (Carnatic percussion), and Kendall Briggs (counterpoint). His awards and grants include Chamber Music America’s “New Works” (2007), Chamber Music America’s “French-American Jazz Exchange” (2009), the Jazz Gallery and Jerome Foundations Residency Commission (2010), the American Music Center’s Composer Assistance Program (2011), the Mid-Atlantic Arts Foundation’s US Artists International grant (2012), and the Rockefeller Brother’s Fund Artist Residency (2012). He holds degrees from Harvard University, Manhattan School of Music, and The Juilliard School, and currently lives in Brooklyn, NY.