Artist: Glen Sobel
Length: 38:54
Description: In this rock drumming masterclass, Alice Cooper's drummer Glen Sobel takes you through a wide variety of drum concepts and techniques. Glen also provides insight into the business side of drumming, marketing, self-promotion and getting gigs.  If you want to play rock drums professionally, this video is for you! 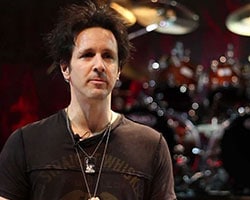 Glen has also conducted and appeared at CLINICS AND DRUM FESTIVALS internationally for Mapex drums, Regal Tip Sticks and Sabian Cymbals. In addition he has established establish himself as a respected player and teacher in LA being hired on as instructor at MUSICIANS INSTITUTE (Percussion Institute of Technology or PIT).

A seasoned pro with world tour experience, Glen has developed a reputation for being a quick study, known to learn an entire set of material in a day or record a CDs worth of songs on short notice. He spends much of his time in Los Angeles doing sessions for some of the music industrys top producers. His performances are dynamic and visual and his track record as a session player is impressive.