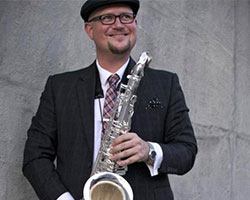 Alto, Tenor, Baritone Saxophonist and Flutist Ian Hendrickson-Smith has been and continues to be one of the most sought after musicians in New York City. Mostly noted for his remarkable tone, soulful approach and blues driven melodies he’s been reaching audiences world-wide through numerous recordings and live appearances. Born in New Orleans, Ian Hendrickson-Smith began his professional music career in 1996, after four years of studies at the Manhattan School of Music.
From 2004 to 2010 Hendrickson-Smith maintained an intense recording and touring schedule as a member of Sharon Jones and the Dap-Kings. He’s performed on virtually every major US late night TV show and has played the worlds premier stages. Ian is currently working towards opening a jazz club in NYC.