Artist: Scott Sharrard
Length: 35:52
Subtitles: English, Spanish
Description: In part one (1 of 2) of this roots, blues & slide guitar lesson, Grammy-nominated guitarist Scott Sharrard (Solo Artist, Gregg Allman, etc.) shows you the ins and outs of this iconic music style. Scott discusses and demonstrates the foundation of the blues, phrasing and note choice, Freddie King, Albert King and more. If you want to get an in-depth look at American roots music, so you can build a strong foundation across numerous styles, this guitar lesson series is for you! NOTE: You can purchase both videos in this series at a discount here! 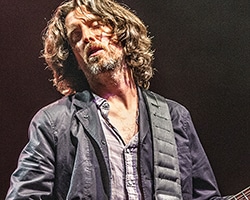 SCOTT SHARRARD IS BEST KNOWN as lead guitarist and bandleader for the late Gregg Allman. But his personal artistic journey – which includes singing, songwriting, producing and arranging – began long before he first teamed up with the rock icon.

It’s a mission that resumes with “Saving Grace,” Sharrard’s fifth album — and his first since Allman’s death.

“Gregg had a pure passion and heart,” Sharrard says of his friend, “especially when it came to being a musician. That authenticity and dedication is a daily inspiration, and I will always carry that with me onstage and in the studio.”

“Saving Grace,” with the blues at its core, bears a distinctly southern spirit, seamlessly assimilating the sounds of American roots music that Sharrard has long embraced. Sessions took place in Memphis and at the historic FAME Studios in Muscle Shoals, Alabama. Half the album employs the Hi Rhythm Section, the other The Swampers of Muscle Shoals.

“These guys are legends and heroes of ours who have played on so many life-changing records,” Sharrard says. “This record was steeped in the best the South has to offer. We cut the rhythm section and lead vocals all live on the floor, direct to tape. Old school. We let the songs and the band speak. We also had some of the best barbecue and soul food you could ever imagine, and a lot of laughs and good times with our heroes. How can you lose?”

‘All those cats schooled me…’

Sharrard’s travels to the heart of the American South began in the Upper Midwest. He was born in Michigan on December 28, 1976 – the day his hero Freddie King died – and spent his formative years in Milwaukee, where he was a club fixture long before he could legally take a drink.

“Milwaukee at that time was an oasis for a whole group of musical masters,” Sharrard recalls. “Mel Rhyne, Buddy Miles, Hubert Sumlin, Luther Allison, Clyde Stubblefield… They were our local bar bands! All those cats schooled me in different ways, backstage, on gigs and at jams.”

Sharrard was 15 when his father took him to a Brewtown blues joint called the Up and Under Pub. There he sat in with singer/guitarist (and local one-named legend) Stokes, who would become his mentor. Another was powerhouse “Chitlin’ Circuit” singer and guitarist Willie Higgins.

Then came a chance 1996 move to New York City. The 20-year-old Sharrard, eager to bolt Milwaukee, had his mind on New Orleans. But his friend Sean Dixon, with whom he had a band called The Chesterfields, had found a rent-controlled apartment in the East Village.

“That settled it,” Sharrard remembers with a laugh. “I became a New York City resident for the first time. My next-door neighbor was Allen Ginsberg, who was already one of my literary heroes at that time. I used to eat at Mee’s Chinese restaurant sitting across from Allen. It was our corner restaurant with a cheap dinner special. He’d always order the ginger fish and write! … It was like a dream, really. All those giant buildings spreading into infinity. It was so overwhelming.”

Sharrard had been in the Big Apple but a year when he met iconic Atlantic Records executive Ahmet Ertegun, who mentored The Chesterfields and gave the young guitar-slinger some sage advice.

“Ahmet told me that you must do it all – and well – if you want to survive as a musician,” Sharrard remembers. “He told me to get it all together: writing, singing, producing, playing, arranging. He convinced me to work twice as hard because around 2000 he saw the end of the music business as we knew it. He felt no one was around to support artists like back in the heyday of the Fifties, Sixties and Seventies.”

The Chesterfields cut three albums and toured nationally before Sharrard began to chart his own course. A series of releases followed, including “Dawnbreaker” (2005), “Analog/Monolog” (2008) and “Ante Up” (2009).

Ertegun wasn’t the only legend with Sharrard on his radar back then: The young guitarist also forged a relationship with Levon Helm – performing with The Band drummer about a dozen times, including his final gig just before his death in April of 2012.

Sharrard remains close with Helm’s daughter, Amy, and a host of other artists on the Woodstock scene.

It was through Amy’s then-husband, multi-instrumentalist Jay Collins – already a member of Allman’s band – that Sharrard embarked on the collaboration of a lifetime. In the fall of 2008, Sharrard began a nearly decade-long run with the Rock and Roll Hall of Famer.

“I grew up on the music of the Allman Brothers,” says Sharrard. “I consider first hearing them to be the ‘Big Bang’ moment for me as a pre-teen. I’ve always been chasing what I like to call ‘Real Rock and Roll,’ a blend of blues, jazz, soul, country and folk – with the central goal being to create an original sound of your own. In that respect, working with Gregg just solidified everything I’ve believed since I was a kid.”

The fruitful partnership ended with the 69-year-old Allman’s death on May 27, 2017. But not before Allman covered Sharrard’s “Love Like Kerosene” on 2015’s “Gregg Allman Live: Back to Macon, GA,” and again on Allman’s eighth and final solo album, the posthumous, GRAMMY-nominated “Southern Blood” (Rounder Records, 2017).

Another “Southern Blood” track, the unforgettable farewell “My Only True Friend” – co-written by Sharrard and Allman – earned a GRAMMY nomination for Americana Song of the Year.

Sharrard’s deep respect for Allman factored heavily into the 2018 release date for “Saving Grace.” Tracking was completed in December of 2016. But Sharrard – knowing Allman’s health was failing and that “Southern Blood” would be his last hurrah – chose to delay its unveiling.

He’s now begun a new chapter with an album he consciously wanted to summarize the last 20 years of his work – and one that showcases the totality of his artistry: as guitarist, singer, songwriter, producer, arranger and bandleader.

In short, he says, it’s rock n’ roll rooted in everything else.

“I basically have a rock ’n’ roll band,” Sharrard explains. “When I was growing up, I loved bands like Little Feat, Led Zeppelin and the Allmans. They would explore so many styles and experiment. That’s something I have always tried to embrace, and that’s how I want to present my music today. This is what I tried to do with Gregg. Now I’m continuing that as a solo artist.”