Artist: Seamus Blake
Length: 48:56
Subtitles: Chinese, English, French, Korean, Spanish
Description: In part one (1 of 2) of this "Jazz Saxophone & Improvisation" masterclass, acclaimed saxophonist Seamus Blake shows you how he attained fluency on the saxophone in the jazz idiom. Seamus discusses transcription, analysis, vocabulary, technique, sound, equipment and more. If you are looking to take your playing to the next level, this jazz saxophone masterclass is for you. NOTE: There is a small PDF bundled with the "purchase" version of this video (not the $9.99 "rental" version) which includes the onscreen notation. You can purchase both videos and the PDF in this series at a discount here! 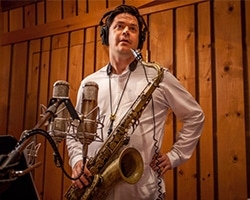