Artist: Steve Hass
Length: 22:15
Description: In this "Drum Maintenance Workouts" lesson, renowned drummer Steve Hass shows you how to develop limb syncopation, over the bar line phrasing, fluidity, improvisational freedom and more. Steve brings you through two custom exercises that will help get you in shape and playing better than ever. If you're looking to add some incredibly useful and challenging exercises to your practice routine, this drum lesson is for you. 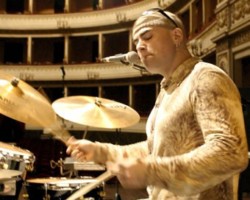 After attending Boston’s prestigious Berklee College Of Music on full scholarship, Steve Hass moved to New York City joining the Ravi Coltrane Group. Along side Lonnie Plaxico, Michael Cain, and Ralph Alessi, Steve was playing a mixture of hard bop, funky odd meter grooves and free improvisation in Ravi’s band. During his five years with the group, Hass was also freelancing and recording with several local singer/songwriters and working at jingle houses in New York City including Fluid Post Music, Three Tree Productions, Ian London Productions, and Red House to name a few. He had local weekly gigs with The Bitter End house band, The Blue Note house band and Monday nights at Zinc Bar with The Ron Affif Trio. He also had touring stints with artists such as, Richard Bona, Christian McBride, Suzanne Vega, Miri Ben Ari and many more. The Ravi Coltrane group gave Steve his first major label album credit for the critically acclaimed Mad 6, released on Sony Music, as well numerous european tours. At 24 years of age, Hass was touring and recording with some of the world’s most influential artists and making a name for himself as an in demand session musician.