Artist: Tim Hagans
Length: 42:10
Subtitles: English, Italian, Spanish
Description: In part two (2 of 2) of this "Daytonality" improvisation masterclass series, acclaimed trumpeter Tim Hagans gives you some insight into his unique and exciting style. Tim discusses and demonstrates his approach to presentation and articulation, playing through changes, creatively soloing and more. If you want a refreshing perspective on improvisation and trumpet playing, this masterclass is for you. NOTE: You can purchase both videos in this series at a discount here! 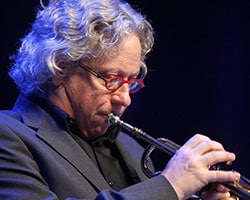