Artist: Tivon Pennicott
Length: 41:15
Subtitles: English, Japanese, Spanish
Description: In this "Color Hearing" jazz saxophone lesson, acclaimed saxophonist Tivon Pennicott discusses and demonstrates his approach to dealing with harmonic alterations on the bandstand. Tivon shows you how he is to able to create beautiful output on the horn after listening and adapting to the input he is receiving from the chordal instruments around him. If you want to be able to add to the musical conversation and speak the language of the cats sharing the stage, this saxophone masterclass is for you. NOTE: Tivon plays piano on over half this video in order to demonstrate some common harmonic colors that you must be able to identify while improvising. 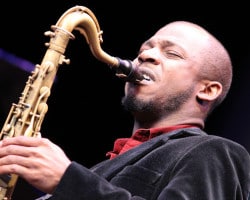 Tivon Pennicott was born in Marietta, Georgia in December of 1985. He began studying tenor saxophone in high school, garnering recognition early on as an outstanding soloist in the Lincoln Center’s Essentially Ellington competition, as well as the Georgia All-state Jazz Band. In 2004, he relocated to Miami to study at the Frost School of Music, where he had the opportunity to perform alongside artists such as: Dave Liebman, Randy Brecker, and Maria Schneider.

While still in college, guitar legend Kenny Burrell invited Tivon to join his quintet. He would then go on to appear on Burrell’s 2008 live release, “Be Yourself.” Tivon’s continuing association with Burrell has led to numerous performance opportunities at many of America’s greatest jazz venues including: Blue Note, Billboard Live (Japan) Catalina’s Jazz Club (Los Angeles, Yoshi’s Jazz Club (Oakland and San Francisco), Smalls Jazz Club etc. alongside special guests like Stevie Wonder, Wynton Marsalis, Roy Hargrove, and many others.

Tivon moved to New York in 2009 and has since established himself as a talented young leader. Tivon is a 2-time Grammy winner as well as a 2nd place winner in the prestigious Thelonius Monk Competition. He enjoys collaborating with a variety of bandleaders in their own tours as well as their recording projects- from Grammy winner Gregory Porter, appearing on his albums “Be Good” and “Liquid Spirit”, to 2-time Grammy Award Winner, Esperanza Spalding, appearing on her crossover success, “Radio Music Society.” He tours with the masterful drummer Al Foster, Roy Hargrove’s RH Factor, Roy Hargrove Big Band, jazz songstress Nellie Mckay, R&B crooner Joe Thomas and central figures in the contemporary jazz scene, like Ari Hoenig, E.J. Strickland, Marko Djordevic, as well as many more.
Tivon’s own endeavors as a leader showcase his tenacity as a player, while also providing a forum for his audacious compositions. His unique style incorporates his masterful attention to rhythm, tasteful melodic lines, and his deep understanding of the importance of the groove. His maturity as a player extends far beyond his years, facilitating music that is refreshing, insightful, and deliciously exciting. Pick up his debut album “Lover of Nature” as a leader in late 2014.