Video 1: In part one (1 of 2) of this jazz guitar comping lesson, legendary guitarist Vic Juris shows you how to truly orchestrate and voice-lead your accompaniment. Vic breaks down various comping techniques and voicings in order to help you become more musical with your playing. If you want to inject more interest, excitement and creativity into your accompanying, this guitar lesson is for you!
Topics Covered: Comping, voicings, triads, 4ths, interval combinations, positions, exercises, 4-notes structures, how to avoid clashing with a pianist, harmony, drop 2 voicings, inversions, omitting notes, chord quality, swapping E strings, comping with a bass player, Etc.

Video 2: In part two (2 of 2) of this jazz guitar comping lesson, legendary guitarist Vic Juris shows you how to truly orchestrate and voice-lead your accompaniment. Vic breaks down various comping techniques and voicings in order to help you become more musical with your playing. If you want to inject more interest, excitement and creativity into your accompanying, this guitar lesson is for you!
Topics Covered: Comping, voicings, increasing chord vocabulary, playing with positions, pedal points, exercises, ii-V-I’s, common rhythms, influences and ethnic feels, voice-leading, omitting notes, harmonics, texture, creating a vibe and injecting interest, harmony, playing with others, alternating between chords and lines, Etc. 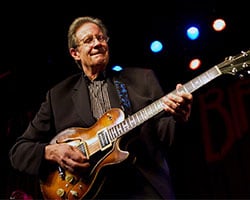