Artist: Shayna Steele
Length: 24:33
Subtitles: English, Spanish
Description: In part one (1 of 2) of this vocal masterclass, acclaimed vocalist Shayna Steele shows you why she's been so in demand with artists like Rihanna, Natasha Bedingfield, John Legend, Matthew Morrison, Bette Midler, etc. Shayna discusses and demonstrates core concepts that every working vocalist should know including how to blend with other vocalists, how to be prepared for vocal auditions, how to mimic other vocal styles, how to promote yourself, how to get gigs as a singer and more. NOTE: You can purchase both videos in this series at a discount here!

Topics Covered: Background work, matching your sound to the artist, blending with other backing vocalists, how to mimic an artist’s sound, different vibrato styles, vocal reels, promoting yourself, securing work, etiquette with the artist, etc. 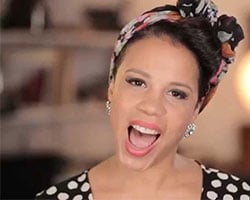 Boasting an industry resume as long as your arm, singer/songwriter Shayna Steele has acquired many labels over the course of her 12 year career, from “Broadway crooner” to “disco screamer”, “Chaka Khaner” to “r&b belter”, and “jazz chanteuse” to “electro diva.” But, while each denotes a unique facet, no one term is able to capture the whole. With her latest album, Steele delivers her most confident and cohesively eclectic set to date, answering the question “Who is Shayna Steele?” with a definitive (and defiant) I’ll Be Anything.

Born in Sacramento to a black Air Force dad and a white mother, Steele lived the itinerant childhood of an American Air Force brat. Moving from California to Oklahoma and then to Ramstein, Germany, where she spent seven formative years, she had little chance to contemplate her racial identity until her family landed in Biloxi, MS in 1985. She explains, “[Ramstein] took up quite a bit of my early childhood and had a big influence on how I viewed life, the world and especially racial tension. Living amongst the safety of an Air Force Base in Germany with many other children from bi-racial families gave me a false sense of security and I wasn’t quite ready for the criticism and ridicule I would receive when we moved to Mississippi.” Feeling “awkward, out of place and unsure where to fit in” in Biloxi, she dove headfirst into music, entering (and winning) several pageants and talent shows, including an appearance on Ed McMahon’s Star Search at the tender age of 15. While she would eventually come to accept the South, and they her (Shayna’s first show in Biloxi in 15 years occurred this past April), her artistic ambitions would finally pull her to New York in May of 1996.

After just three months in the city, her dynamic voice and fierce delivery were recognized as she landed a role as the first replacement in the history of the Broadway production of Rent. Joining the original cast at its peak, the experience/exposure of this gig quickly parlayed into roles in Jesus Christ Superstar and Hairspray, as well as several TV appearances including spots on The Grammys, The Oprah Winfrey Show, Conan O’Brien, David Letterman and Carson Daly.”

Her move to the East Coast also exposed her to a huge variety of live music, simply unavailable in MS. “I never really felt ‘grounded’ until I moved to NYC. It was then that I really opened up to different genres of music other than R&B.” Schooled in jazz by her Godfather and gospel by her choir director, the Grammy-nominated Michael McElroy, Steele began to develop her sound, blending new influences, from Karen Clark Sheard (The Clark Sisters) to Rachelle Farrell, with her childhood icons Stevie Wonder, Aretha Franklin, Chaka Khan and the Temptations. A completely unexpected call in 2005 would drop her squarely in the middle of genre she had absolutely no experience with: Electronica. Hearing that Moby “needed a screamer” for a track off his new album Hotel, a mutual friend recommended Steele, resulting in the disc’s second single “Raining Again”. Two years later, she was back, laying down vocals for “Extreme Ways (2007)” – Moby’s theme song to The Bourne Ultimatum – and in early 2008, “Disco Lies”, The first single off Moby’s 2008 release Last Night. The song reached #1 on the US Billboard Dance charts and went on to be featured in J.J. Abram’s summer blockbuster Cloverfield. Her voice has remained in high demand with recent features on the Grammy-nominated album Great Joy with The Broadway Inspirational Voices, and the soundtracks of Legally Blonde 2, Bambi 2, the 2007 re-remake of Hairspray starring John Travolta, and a singing feature on HBO’s The Sopranos during the show’s final season.

Inspired by a new musical awareness and the endlessly creative and supportive environment of Broadway, Steele started writing in earnest in 2002. It was during this period that she met David Cook. A pianist, composer and industry veteran, Cook has recorded or performed with some of the best vocalists in business including Natasha Bedingfield, Academy Award-winner Jennifer Hudson, and Lizz Wright. The two quickly developed a creative synergy, collaborating on Steele’s eponymous debut EP in 2004. Though self-released, the album’s breakout soul-funk single “High Yella” achieved the attention she needed to raise her solo profile. Creating not one, but two live bands, including her album players and her jazz group, Shayna Steele’s B-Side, she’s since shared the stage with luminaries Ledisi, opening for George Clinton and the Sugar Hill Gang, a featured singer with Bjorkestra and Grammy winning conducter/composer/trumpeter Dave Douglas, the Grammy- nominated Broadway Inspirational Voices and as a sideman with Lizz Wright, Bette Midler, Natasha Bedingfield, John Legend, Matthew Morrison and Rihanna.

All of which brings Steele to the release of her first full-length album, I’ll Be Anything. Written, recorded and produced with Cook over the course of three years, the record represents an artistic culmination and catharsis for Steele; “This album covers so much of my life. Whether it was one beautiful second or one horrible year, it happened to me or I witnessed something spectacular that changed me … I couldn’t limit myself to one sound, one voice or style of writing, but … it all makes sense. It all flows.”

Shayna is currently working on new music and preparing for her second European tour in January and February of 2012. Be on the lookout for new songs as Shayna heads to the studio…