Artist: Yotam Silberstein
Length: 35:10
Subtitles: English, French, Portuguese, Spanish
Description: In part three (3 of 3) of this "Jazz Guitar Studies" masterclass, acclaimed guitarist Yotam Silberstein follows up on his "Foundations for Jazz Guitar" series. Yotam answers questions from his fans and discusses reharmonization, comping, beat placement, composition, influences and more. If you want to internalize the nuances of jazz on your instrument so you can freely express yourself, this guitar lesson series is for you. NOTE: There is a PDF bundled with the "purchase" version of this video (not the $8.99 "rental" version) which includes the onscreen notation. You can purchase all 3 videos and the PDF in this series at a discount here! 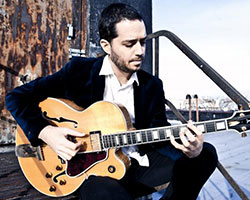