Artist: Yvonnick Prene
Length: 29:30
Subtitles: English, Spanish
Description: In this jazz harmonica lesson, French-born and NYC-based harmonica player Yvonnick Prene shows you how to improvise through a jazz standard. Using the chord changes of "Autumn Leaves", Yvonnick takes you through a step-by-step process, so that you can freely solo through the harmony, outline the changes, use chromaticism, apply substitutions and more. If you need to add some jazz vocabulary and harmonic knowledge to your repertoire, so you can sound more authentic when playing jazz standards, this harmonica masterclass is for you. 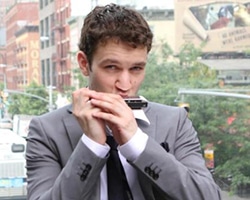 Born in France, he began as a guitarist, later switching to the diatonic harmonica, and eventually settling on the chromatic harmonica as his primary instrument. He first began playing the harmonica professionally in Parisian clubs at 17, then started his studies at Sorbonne University, from which he received a master’s degree in music (2011). While still enrolled at the Sorbonne, Prené relocated to New York City and was awarded multiple full-tuition scholarships at The City College of New York, (MICEFA, 2007), Columbia University (Alliance Program, 2008) and at the New School for Jazz and Contemporary Music (Merit-Based Scholarship, 2009) where he had the opportunity to study with Lee Konitz and Reggie Workman among others. In 20011-2012 he earned a BA from The New School for Jazz & Contemporary Music and Master degree from Sorbonne University.

Yvonnick is the founder of New York Harmonica School, Harmonica Studio, author of 13 books and bandleader of The Yvonnick Prene Quartet and Padam Swing. He is currently based in Manhattan, New York City.