Previous Next
40 Funny Quotes By Musicians 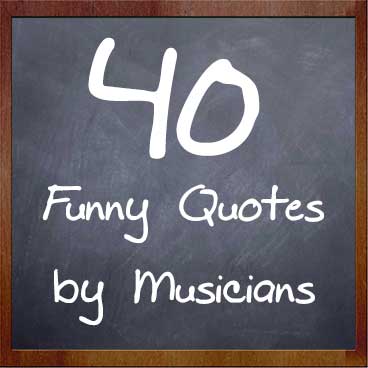 As many of you know, I frequently post inspiring or funny musician quotes on our Facebook, Twitter, Tumblr and Google+ pages. Since there aren’t many good sources to find all of these gems in one convenient place, I’ve decided to compile 40 of my favorites in this post. Feel free to add some more in the comment section below  too…I’m always hunting for new ones. So, here we go…

“All music is folk music. I ain’t never heard a horse sing a song.”
― Louis Armstrong

“All the good music has already been written by people with wigs and stuff.”
― Frank Zappa

“My music is best understood by children and animals.”
― Igor Stravinsky

“Do it again on the next verse, and people think you meant it.”
― Chet Atkins

“To achieve great things, two things are needed: a plan and not quite enough time.”
― Leonard Bernstein

“If I didn’t do this well, I just wouldn’t have anything to do…I can’t cook, and I’d be a terrible housewife.”
― Freddie Mercury (Queen)

“I don’t know anything about music, In my line you don’t have to.”
― Elvis Presley

“There are two golden rules for an orchestra: start together and finish together. The public doesn’t give a damn what goes on in between.”
― Thomas Beecham

“There are two kinds of artists left: those who endorse Pepsi and those who simply won’t.”
― Annie Lennox

“After I saw Jimmy [Hendrix] play, I just went home and wondered what the f*** I was going to do with my life.”
― Jeff Beck

“Money doesn’t talk, it swears.”
― Bob Dylan, Music at Night and Other Essays

“Actually I don’t remember being born, it must have happened during one of my black outs.”
― Jim Morrison

“I don’t deserve a Songwriters Hall of Fame Award. But fifteen years ago, I had a brain operation and I didn’t deserve that, either. So I’ll keep it!”
― Quincy Jones

“When people say you’re doing something radical in rock or dance music, I’m not sure how special that is. What we do is so old-fashioned. It’s like trying to do something innovative in tap-dancing.”
― Jonny Greenwood (Radiohead)

“Competitions are for horses, not artists.”
― Bela Bartok

“I’d rather be a musician than a rock star.”
― George Harrison

“I smash guitars because I like them.”
― Pete Townshend

“It’s easy to play any musical instrument: all you have to do is touch the right key at the right time and the instrument will play itself.”
― Johann Sebastian Bach

“Jazz is not dead, it just smells funny.”
― Frank Zappa

“I never had much interest in the piano until I realized that every time I played, a girl would appear on the piano bench to my left and another to my right.”
― Duke Ellington

“There’s nothing like the eureka moment of knocking off a song that didn’t exist before – I won’t compare it to sex, but it lasts longer.”
― Paul McCartney

“Let me be clear about this: I don’t have a drug problem, I have a police problem.”
― Keith Richards

“If you’re listening to a rock star to get your information on who to vote for, you’re a bigger moron than they are.”
― Alice Cooper

“To listen is an effort, and just to hear is no merit. A duck hears also.”
― Igor Stravinsky

“To get your playing more forceful, hit the drums harder.”
― Keith Moon (The Who)

“Sometimes we pee on each other before we go on stage.”
― Trent Reznor

“In order to compose, all you need to do is remember a tune that nobody else has thought of.”
― Robert Schumann

“I think John would have liked Free As A Bird. In fact, I hope somebody does this to all my crap demos when I’m dead, making them into hit songs.”
― George Harrison

“In the end we’re all Jerry Springer Show guests, really, we just haven’t been on the show.”
― Marilyn Manson

“If I knew I had to play this song the rest of my life I probably woulda wrote something else….”
― Joe Walsh (“Rocky Mountain Way”)

“Too many pieces of music finish too long after the end.”
― Igor Stravinsky

“I never practice my guitar… from time to time I just open the case and throw in a piece of raw meat.”
― Wes Montgomery

“When an instrument fails on stage it mocks you and must be destroyed!”
― Trent Reznor

So, there you have it…I hope you enjoyed these pearls of wisdom…lol.  At the very least, you’re now armed with some random small talk at your next gig or party! But I’d like to end with one last quote which didn’t make the list above. I know…some of you may now consider this to be a post of 41 quotes and I truly apologize for misleading you with the title…my bad.

“Talking about music is like dancing about architecture.”
― Unknown