Artist: Anupam Shobhakar
Length: 1:17:00
Description: In this full-length masterclass, Anupam Shobhakar and Joel Harrison give you an introduction to the music of North India and show you how it can be applied to Modern Jazz. Anupam and Joel discuss/demonstrate how you can combine these eastern harmonic, melodic and rhythmic elements with western musical language. If you want to add a new exciting flavor to your musical vocabulary, this masterclass is for you. NOTE: There is a small PDF bundled with the "purchase" version of this video (not the $11.99 "rental" version), which contains the embedded notation seen in the masterclass. 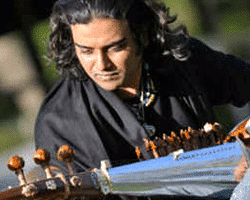 Anupam Shobhakar, is an Indian musician, composer, instrumentalist, record producer, and classically trained sarodist currently living in Brooklyn, New York. He has released three World Fusion albums, and one classical Indian music album. He has performed live around the world at various venues and for charitable causes. Shobhakar’s track “Water” made it to the first round of the Grammy Awards.

Shobhakar met Ustad Aashish Khan briefly when he came to do a concert in Bombay and stayed at Shobhakar’s apartment. Shobhakar states that he was “blown away by Khan’s command over the Sarode,” and has been studying with him ever since. Shobhakar lists Khan, and his father, Ustad Allaudin Khan (guru to Ravi Shankar and Ali Akbar Khan), as his main playing style influences: “Slightly aggressive in approach, but never at the cost of the melodic charm.” Shobhakar was recognized for his talents as an Indian Classical Music performer by the Priyadarshni Academy, who awarded him the Best Young Artist Award. Shobhakar’s current focus is World Fusion and Jazz Fusion.