Artist: Danny Lux
Length: 25:38
Description: In part two (2 of 2) of this "composing music for TV" masterclass, professional television and film composer Danny Lux discusses and demonstrates how to work successfully in the TV/Film music industry.  He gives you tips and tricks for mixing your tracks, composing pieces that work under dialogue, producing music under strict deadlines and more.  If you are an up-and-coming composer, this video is for you! NOTE: You can purchase both videos in this series at a discount here! 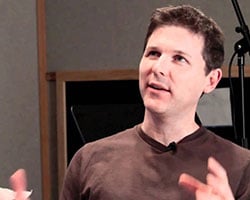