Artist: Daniel Dor
Length: 49:05
Subtitles: English, Spanish
Description: In part one (1 of 2) of this masterclass series, renowned drummer/percussionist Daniel Dor breaks down his system for achieving multi-dimensional rhythmic playing for all instrumentalists. Daniel discusses and demonstrates how to simplify the process of creating new metrically modulated grids, so you can phrase in new and exciting ways. If you want to introduce rhythmic ratios in your playing, so you can integrate greater depth in your improvisations, this masterclass series is for you. NOTE: If you want to buy this 2-part series at a discount, you can get the entire bundle here! 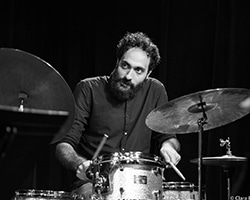