Artist: David Gilmore
Length: 33:49
Subtitles: English, Portuguese, Spanish
Description: In part two (2 of 2) of this guitar masterclass series, renowned guitarist David Gilmore shows you how to develop a strong rhythmic core on the instrument. David takes you through a series of exercises and concepts aimed at helping you solidify the pulse in both common and odd meters. If you want to internalize rhythm so you can express yourself freely in any time signature, this guitar lesson series is for you. NOTE: If you want to buy this 2-part series at a discount, you can get the entire bundle here! 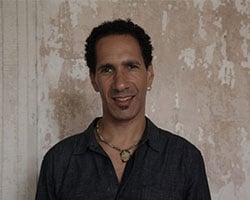 In addition to his significance presence on the international touring scene, Gilmore has also appeared on over 50 recordings, including two of his own as leader. His first CD, Ritualism (2001) received international critical praise and was nominated for the 2001 Debut CD of the Year by the Jazz Journalists Association.

Gilmore’s playing has been compared to guitarists as diverse as George Benson, Wes Montgomery, Jimi Hendrix and Leo Nocentelli. He is committed to an improvisational approach that reflects a global awareness. One result of this global ethic, the work “African Continuum” – enabled by a CMA New Works Composer Grant– was premiered to the public in Spring 2003.

In addition to recording and touring, Gilmore teaches Guitar Studies at the prestigious Berklee College of Music where he is an Associate Professor. He also conducts master classes around the world, giving him an opportunity to share his talents, concepts and experiences with new generations of young musicians.