Artist: David Liebman
Length: 53:07
Subtitles: English, French, Spanish
Description: Dave Liebman and pianist Richie Beirach have been collaborating for over fifty years performing in duo and small group settings (Lookout Farm, Quest) combined with teaching at the highest level. Both artists are known for their verbal abilities to talk about aesthetics and the improvising process along with detailed analysis of their very singular style of playing together. This video followed a question and answer format between the two artists and submitted inquiries from students over the years. This is an inside look into the minds of accomplished masters who represent the essence of jazz.

Topics Covered: Lieb’s preferences when playing with drummers, pianists and guitarists; making a standard (Softly) into a “chromatic” harmonic event; how does Richie accompany Dave; comments on Lieb’s interaction with John Scofield, McCoy Tyner, Chick Corea and others; Richie’s association with Stan Getz and Chet Baker. 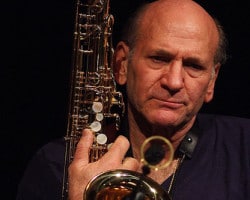 NEA Jazz Master David Liebman’s career has spanned nearly five decades, beginning in the early 1970s as the saxophone/flutist in both the Elvin Jones and Miles Davis Groups, continuing as a bandleader since. He has played on over five hundred recordings with nearly two hundred under his leadership or co-leadership. In the jazz education field he is a renowned lecturer and author of several milestone books: “Self Portrait Of A Jazz Artist,” “A Chromatic Approach To Jazz Harmony And Melody,” “Developing A Personal Saxophone Sound,” (translated into multiple languages), in addition to teaching DVDs, journalistic contributions to periodicals and published chamber music.

His autobiography “What It Is” (Scarecrow Press) is a fascinating look into Lieb’s career.

Lieb is the Founder and Artistic Director of the International Association of Schools of Jazz (IASJ) since 1989, which is a worldwide network of schools from nearly 40 countries. Liebman’s awards, besides the NEA honor, include the Jazz Educators Network (JEN) Legends of Jazz (2013); the Order of Arts and Letters (France 2009); Jazz Journalist’s award for Soprano Saxophone (2007); Grammy nomination for Best Jazz Solo (1998); Honorary Doctorate from the Sibelius Academy (Finland-1997). He is currently Artist in Residence at the Manhattan School of Music and guest lecturer at both the University of Toronto and Berklee College of Music. Dave has consistently placed in the top positions for Soprano Saxophone in both the Downbeat and Jazz Times polls since 1973.