PURCHASE VIDEOS 1,2,3 & THE PDF IN THIS SERIES AT A DISCOUNT HERE!

Artist: Kenny Werner
Length: 37:06
Subtitles: English, French, Japanese, Korean, Portuguese, Spanish
Description: In part two (2 of 3) of this jazz piano masterclass, legendary pianist and educator Kenny Werner demystifies the art of playing through changes. Kenny's easy to follow and effective method shows you how to achieve effortless mastery in your lines, so that your solos have solid voice leading and a smooth flow. Do you want the changes to play themselves? If so, this video series is for you! NOTE: This series is meant to be viewed and studied in order, so jumping ahead may sabotage your efforts. There is a PDF bundled with the "purchase" version of this video (not the $8.99 "rental" version), which contains the embedded notation seen in the masterclass. If you want to buy this 3-part series at a discount, you can get the entire bundle here! 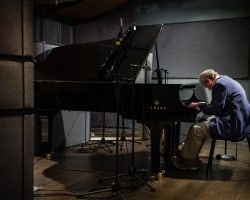