PURCHASE VIDEOS 1,2 & THE PDFs AT A DISCOUNT HERE!

Artist: Nelson Veras
Length: 32:53
Description: In part one (1 of 2) of this jazz guitar webinar (recorded on 5/1/2021), acclaimed guitarist Nelson Veras takes questions from the audience and gives insight into his style and techniques. Nelson discusses his use of Messiaen modes, playing standards, rhythm exercises and much more! If you're looking to get inside the exciting playing style of Nelson Veras, this guitar masterclass series is for you! NOTE: There is a PDF bundled with the "purchase" version of this video (not the $9.99 "rental" version), which contains the embedded notation seen in the masterclass. If you want to buy this 2-part series at a discount, you can get the entire bundle here! 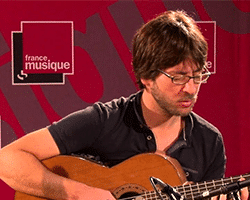 Born in Brazil in 1977, Nelson Veras developed a unique style based on a mix of classical guitar, contemporary jazz and his Brazilian roots.!

Nelson Veras moved to France at the age of 14 and instantly drew the attention of a large audience after performing on a special TV show where he played with Pat Metheny. When he was 16 he formed his first band, a quartet with with Eric Barret, Michel Benita and Aldo Romano, with which he performed at renowned festivals such as Jazz in Marciac and the Nice Jazz Festival. At the same time he was part of Aldo Romano’s band with Palle Daniellson and Stefano Di Batista, and joined Michel Petrucciani’s sextet ‘Young Lions’.!

In 1998, at the age of 20, he was one of the 3 winners of ‘Premio Visa of Brazilian Music’ alongside Hamilton de Hollanda and Andre Mehmari.!

In 2001 he performed alongside Lee Konitz, Gary Peacock and Aldo Romano in a tribute concert to Michel Petrucciani.!

2003 marked the recording of his first solo cd on Label Bleu with Magic Malik, Harmen Fraanje and Stéphane Galland.!

In 2009 he recorded a solo guitar CD released on Beejazz. And in 2011 he recorded a trio CD on the same label with bassist Thomas Morgan and drummer Stéphane Galland. Each of these records has received an extremely positive response from both the professional press and the general audience. !

Nelson Veras gave countless workshops all over the world and has been a teacher at the ‘Conservatoire National Supérieur de Musique et de Danse de Paris’ (CNSM).!