Artist: Nitai Hershkovits
Length: 33:23
Subtitles: English, Spanish
Description: In part one (1 of 2) of this jazz piano masterclass series, renowned pianist Nitai Hershkovits shows you what he works on everyday to improve his playing. Nitai discusses and demonstrates utilizing shared notes in improvisation, finding interesting voicings, arranging on the spot, achieving tone variety and more. If you're looking for a fresh and creative perspective on jazz piano playing, this masterclass series is for you. NOTE: There is a small PDF bundled with the "purchase" version of this video (not the $8.99 "rental" version), which contains the embedded notation seen in the masterclass. If you want to buy this 2-part series at a discount, you can get the entire bundle here! 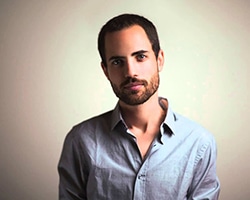 Pianist and composer Nitai Hershkovits has been described as a ‘Genuine prodigy’ by BBC music. He is a charismatic performer with an incredibly strong voice and musical vision.

His dynamic playing crosses boundaries and genres thanks to a light, elegant touch that conveys a full spectrum of deep emotions and contrasts. It is this touch that gives his audience the experience of someone who has done things a little differently.

Nitai is an exception as a musician having done the opposite of what most do: he studied jazz as a foundation and came into classical later. This unique combination emboldens his eclectic playing style. ‘Reminiscent of a silky-toned old piano swinger such as the late Hank Jones’ (The Guardian), intertwining bliss and melancholy with skillful freedom.

Foundation (AICF) four years in a row between 2004 and 2010. Another highlight was his one-time prestigious Chase Scholarship award in 2009 sponsoring a B.A. degree at the Jerusalem Rubin Academy of Music. Nitai accepted and tried their classes for a time, but quickly realized the institution setting wasn’t for him. Private lessons and listening to records offered more focus and choice in his development of taste and repertoire.

In the midst of 2011 Nitai got a phone call from bassist Avishai Cohen (known for his long time collaboration with Chick Corea as well as for his successful band leading career). As part of Cohen’s Trio as well as of other symphonic projects, they recorded three albums together:

Duende, a Piano & Bass Duet for the legendary label Blue Note; A chamber music project Almah for EMI and a Trio album -From Darkness for Razdaz . Nitai was Avishai’s musical director of his strings project and a few others along their five year collaborative work together. Nitai has had the privilege of touring all over the world and performing at many different venues: Salle Pleyel, Vienna Konzerthaus, l’Olympia, Alter Oper, North Sea Jazz Festival, Village Vanguard, Antibes Jazz Festival, Jazz à Vienne, Montreux Jazz Festival, Barbican Center and Tonhalle, to name a few.