Artist: Orlando le Fleming
Length: 39:14
Subtitles: English, French, Italian, Spanish
Description: In this jazz upright bass masterclass, renowned bassist Orlando le Fleming shows you what he feels is most important about being a working professional. Orlando discusses sound, technique, time and more as he brings you through various exercises and concepts focused on strengthening your jazz bass playing. If you want to get some great tips from a first-call bassist, this lesson is for you. NOTE: There is a small 3-page PDF bundled with the "purchase" version of this video (not the $8.99 "rental" version) which includes some of the technical exercises seen in the video. 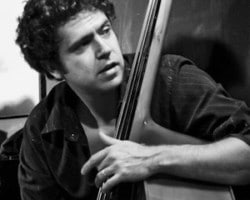 Orlando le Fleming was born in Birmingham, England on July 7,1976, into a family of professional musicians. His mother is an accomplished cellist and educator, and his father a composer.

He seemed destined for an athletic career and was briefly a professional cricketer, until his lifelong passion for music won out when he was granted a place at London’s Royal Academy of music. After moving to London, he quickly established himself as one of the UK’s most prominent bass players. He was the first call for touring and recording for, among others, Jason Rebello, Julian Joseph, Iain Ballamy, Tommy Smith, Jean Toussaint and Guy Barker.

Word quickly spread across the Atlantic, and with geography at his advantage, Orlando was soon in demand to perform and tour throughout Europe with visiting U.S. musicians such as Bill Charlap, Art Farmer, George Coleman, Dave Liebman, and most notably, Branford Marsalis.

Orlando’s talents are not limited to the role of sideman. In 2010, he released his debut album, “From Brooklyn With Love”,showcasing his exceptional talent as a composer and also featuring Antonio Sanchez on drums. Orlando’s current and future projects include the OWL Trio (a chamber group co-led with Will Vinson and Lage Lund, whose eponymous debut CD was widely acclaimed) and a rigorous touring schedule with Ari Hoenig, the Joey Calderazzo Trio, and as the new bass player in Kurt Rosenwinkel’s New Quartet