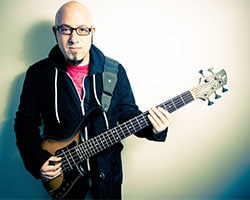 Steve Jenkins is part of the new wave of modern electric bass players. In addition to his mind-blowing technical prowess, his musicianship has allowed him to fit into a diverse of range of musical situations that have run the gamut from face-melting prog-metal to experimental microtonal jazz-funk to dubbed-out electronica bass lines to classic sounding r&b grooves–sometimes all within the framework of one song. He also has a strong grasp of using effects and technology which makes him a true sonic force to be reckoned with. Whether playing as a sideman or as a leader making his own music, Steve is known for his beyond solid groove, creative use of cutting-edge effects and textures, melodic/virtuosic solos, and mastery of different tones and techniques for any given musical situation.

As an educator, he has taught at Berklee College of Music’s BassLines Summer Program for the past 8 years. He also was part of the first group of faculty to teach at the Swarnabhoomi Academy of Music in Southeast India in the Summer/Fall of 2010. He has also taught masterclasses and clinics all over the world.Steve is currently an artist-in-residence at The Collective school of music in NYC. He also teaches private lessons in person and via Skype.

Here are what some critics say:
“Steve Jenkins And The Coaxial Flutter]” is a showcase for Jenkins’ wealth of bass techniques, his wide variety of tones, and his ability to smoothly jump from fusion solos to metal riffage, sometimes all in the span of one song.”-Bass Player Magazine

“Having already held his own with avant-garde guitarists David Fiuczynski and Vernon Reid, New York City’s Steve Jenkins doesn’t need to prove anything in terms of what he can handle. There’s plenty more than just chops and math-rock proficiency at work here.”-Bass Player Magazine

“He belongs in the vanguard of formidable young bass soloists, but he separates from that pack by locking down every groove that comes his way.”-All About Jazz