Artist: Harvie S
Length: 28:56
Description: In this jazz upright bass lesson, renowned bassist, composer, arranger, producer & educator Harvie S discusses how he approaches soloing on the instrument. Harvie talks about the history of the bass solo, working with the melody and more. If you want to get some real wisdom from a man with a TON of experience in the jazz scene, this bass masterclass is for you. NOTE: This masterclass is more conceptual in nature and does not include any harmonic analysis or scale choices. 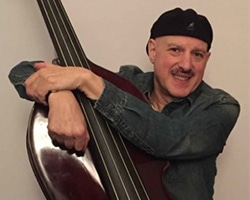