Schoeps Stereo mic clone for under $200…I Love it!

Next
Schoeps Stereo mic clone for under $200…I Love it! 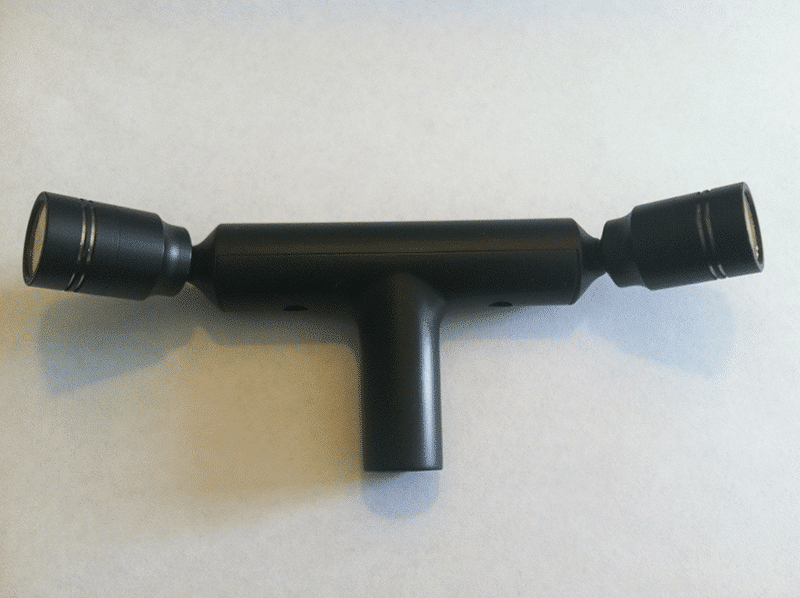 Before one of my recent filming trips to New York City, I decided that I wanted to bring along another stereo mic to compliment my Rode NT4.  Stereo microphones are crucial for my purposes when I’m filming Masterclasses, Clinics, Seminars, etc. They’re essential because of 2 main reasons: Phase and Portability.  First of all, stereo mics are naturally in phase because of the hard mounted mic placement.  Most of the time when I’m shooting on location with artists there is a very definite time frame we’re dealing with due to their gigging schedule, etc.  Also, I usually travel to a spot and have to set up my laptop (Logic Rig), Soundcard, Mics, Cameras, etc.  This means that there is often no time to perfect the mic placement and that can cause phasing problems.

Second of all, carrying 1 stereo mic when traveling cuts down on your gear significantly.  There is only 1 mic to carry instead of 2 (obviously), but a stereo mic only needs 1 stand instead of 2 as well.  This will save your back for sure…especially when you’re recording 8 to 10 channels of audio.  And don’t forget that there is a lot of walking in NYC, so you have to be mobile.

Anyway, let’s talk about the Superlux S502 Stereo Microphone.  It’s an ORTF stereo mic based on the Schoeps MSTC 64 which actually costs around $3600.  Incase you don’t know what ORTF is, it’s one of 2 popular ways to mount a microphone in order to eliminate phase.  XY is the other way to do this…which is how the Rode NT4 works.  ORTF and XY sound very different and both have there place in recording, but that discussion is for a different post.

Since, I already had an NT4 (XY), I really wanted to tryout an ORTF mic, but I couldn’t afford $3600…jeez!  I was randomly reading a forum post at gearslutz.com and I came across a thread about the Superlux S502.  People were raving about it and they posted some sound examples.  I was really blown away by how good it sounded and the price was around $170 brand new!  I figured, what the hell, I can always return it if it’s junk…so I bought it.

So how does it Sound?

It’s pretty damn amazing for the price!  I’ve used this mic for many of the videos on the site.  I’ve miked grand pianos, upright pianos, drums, percussion and more with this cheapie and the results are spectacular!  Now, I’m not going to say that this mic would win the A/B comparison against the Schoeps which costs over 20 times as much…that would be silly.  What I am saying though, is that for the price, I haven’t heard anything sound this good…even at twice the price! I’m actually scared to see what cheap parts are making this thing tick, but who cares…the design works!

So, I would obviously recommend this microphone to anyone who needs a portable budget stereo mic.  I’m pretty sure you’ll be impressed and phase free!