Previous Next
Don’t Sign That Contract! Music Licensing, Music Business and the Uninformed 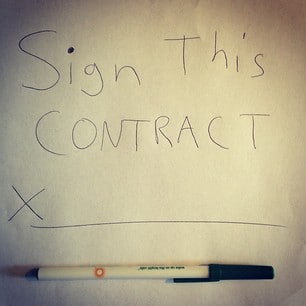 Recently a friend of mine sent a music licensing agreement for me to look over. A woman had contacted him asking for permission to use a few of his songs in a film and he wanted a second opinion on the contract she attached. Since I have a bit of licensing experience I agreed to check it out, but I prefaced my reply with “I’m obviously not a lawyer, but here ya go”. Anyway, I noticed a few things that I thought I’d share with the public, because I think it might be useful to some of you musicians out there.

First, let me say once again, “I’m not a lawyer” and this in no way constitutes legal advice. You should get in touch with a lawyer if you are uncertain of what a contract means. For this article, I’m not going to get into the fine legal points of this agreement though. This is more about common sense, detective work and negotiation strategy.

So back to the story…this woman (who will remain nameless) sent this contract over to my friend (who will also remain nameless) and she said, “Please sign this agreement and send it back to me right away. Then I’ll figure out what songs I’m going to use in the film”. My Analysis: Huh, seriously? Why is she rushing him to sign this agreement? Also, why is she so vague about what songs she might be using? The film in question is an independent feature and my friend’s music is mostly singer/songwriter folky pop. In my opinion, she should know which songs she is interested in licensing and she should write them into the agreement. At this point I’m thinking that she’s either being shady or that she’s inexperienced.

So, I start reading this contract and my bullshit meter goes haywire. The first thing that strikes me as odd is that it under the “Grant of License Section”, it mentions videocassettes and videodiscs, but makes no mention of DVDs. Without reading any further, I know that this contract was adapted from one of those free templates found online. For those of you who don’t know, there are many free music business contracts that are posted on the web. However, they are typically free for a reason and are usually pretty outdated and not incredibly legally sound. As I continue reading this contract, I notice more random things, like that fact that no monetary compensation is mentioned and it doesn’t include the nuances that I’m used to seeing in a standard “airtight” licensing deal. In every licensing deal that I’ve ever seen, the term “gratis” is used when the person/company is offering no money. Also, if they are offering $1 or $20,000, it will be written into the agreement as well. This contract didn’t mention money at all…not even a word! This means two things: 1) she’s obviously trying to get these tracks for free and 2) she’s again exposed herself for using a shoddy contract template. I mean…this wording doesn’t even do her any favors legally.

So, let’s do some detective work. I found a two-line section in the contract where she didn’t alter the text and I copied it to my clipboard. It’s important that I didn’t copy text that she had changed in any way (ex. the current year, the film’s title, etc.). For this to work it would have to be the original text from the template. Then, I pasted these two lines into Google with quotes around them (ex. “This is the exact text I’d like to search for”). This ensured that Google would search for this phrase verbatim. So what happened? I found the template, it was the first search result, it was freely available and it was dated 2005…ouch. I was right about my assumptions, but what do you do with this information?

Now that we knew this person used a free outdated template to attempt to license my friend’s music, we could also assume a couple things. 1) She probably didn’t have enough money to hire a lawyer or she was being cheap. 2) She was not very educated about what the agreement was saying, because it was outdated and didn’t offer adequate protection for her either.

If you (the reader) were in this situation, this information could be used to negotiate if you were still interested in the licensing deal. Let me explain…

If you decide to negotiate in this case, I would suggest NOT mentioning that you’re aware of her ignorance. Instead, I would craft a very knowledgeable, friendly and professional response asking for specific revisions. For instance, you could ask her to amend the contract with a “step deal” so that you would offer your songs “gratis” for festival use only. If the film got picked up for theatrical (domestic or foreign) or DVD distribution (domestic or foreign) you would receive a set amount of money at that time. A “step deal” is really just a way to get paid when a milestone is reached, so it could be any milestone at all. I just used theatrical and distribution for illustration purposes. There are many additional ways you could negotiate here without a step deal too. You could obviously ask for money upfront or you could tell her that you’d like for the agreement to be for festival use only and that any other uses would be negotiated in good faith, etc. Whatever you decide to write, make sure it’s professional and that it sounds like you have done this a million times. You can most likely assume that she’s not an expert and may not understand the terms you’re using, so write phrases like, “we could employ a standard step deal” or “can you please amend the Soundtrack CD section so that I would receive the standard royalty rate?” By writing these types of sentences and using the word “standard”, it implies that you’ve done this many times, which will either strike fear into her heart or allow you to get your way. Or it may make her Google your terms, which is why it’s important that you’re also not full of crap. Note: this strategy will not work with someone more experienced. The most important thing to realize here is whom you’re dealing with. The odds are that this woman doesn’t have any money to give you or that she is not willing to pay you regardless of her financial situation. But hey, you never know. I’ll leave the further negotiation strategy for another blog post, because my hands are tired from typing.

I hope this helps a few of you out.